This is an introduction to a new column we will be running called “Analog Bodysurf.”

We are bodysurfers first. But photography is a secondary passion that complements our Ocean pursuits. 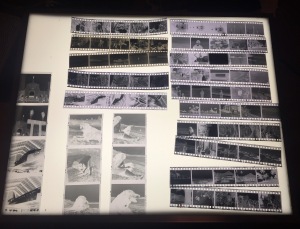 After a few years of ever upgrading digital cameras, Eric found a Yashica TLR film camera from the 70s at a thrift store. Turns out we are both collectors/pack rats of old, vintage stuff. The first time I handled the Yashica, I was hooked. We immediately started searching swap meets, yard, estate sales, antique stores, thrift shops and the Internet for old cameras. A couple years later and we each have about 10 cameras, developing materials and we can turn his garage into a darkroom for printing with an enlarger.

From Tom Blake to Doc Ball to Ron Church, it is incredible that all surf photography before about the year 2000 was taken 36 images at a time on a film camera. It is said that a photographer does not begin taking quality photos until he actuates a camera 10,000 times. Well then, we might not ever take good analog bodysurf shots, but we certainly enjoy the process anyway. 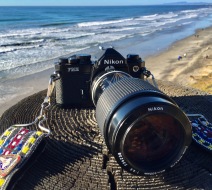 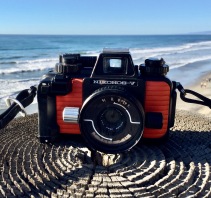 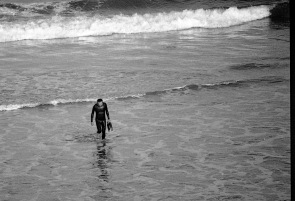 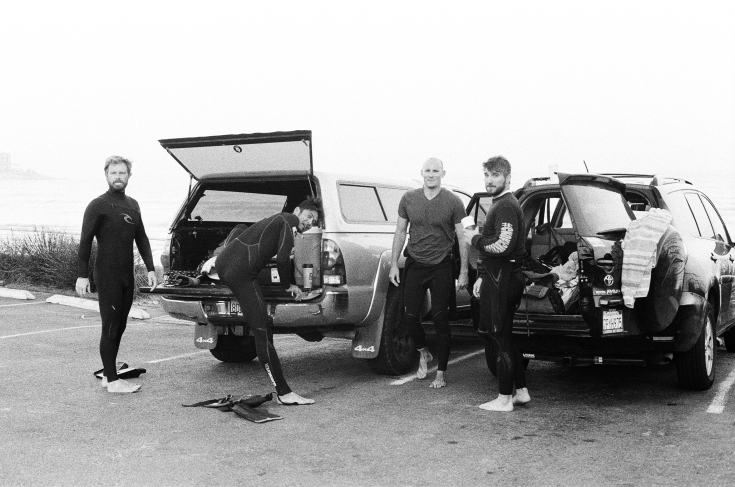 “The green water of the Atlantic Ocean runs through his veins.”

We left a cold, dark Richmond at 3:55 a.m. It had been ten years since I had followed 64 to the Virgina coast, through the amber lit tunnel and south across the Wright Memorial bridge to the Outer Banks of North Carolina. I had since relocated to west coast where bodysurfing grew into the invasive “hobby” which touches all parts of my life. While the coast in the west has been kind to offer all that she has, it had always been a dream of mine to bodysurf the sandbars I had grown up swimming. This time the trip included my brother and sister. She slept in the back while he and I talked about how bad the wind would probably be.

The sun began to ignite the sky as we crossed Dare County and familiar sights led the way. The black and green Grave Digger monster truck on its nose, the red trimmed hammock store and their countless advertisements all signal that the path is getting shorter. We pulled up to Natural Art Surf Shop who hooked us up with rental 3:4s and left them out back so we could have the day to ride. From there we followed the signs to the Hatteras lighthouse. Sixteen years ago I took my very first surfboard out at the lighthouse. My first session I hardly made it to my feet and the nose of the World Core board punctured my lower lip, but I was back. In 99′ they moved the lighthouse away from the eroding coastline so it looked different, but in all honesty I could hardly remember what it looked like before. I just knew that’s where the hook was set.

Matt and I jogged through the deep puddles to the sand. Overcast with looming weather, but there was swell. We hooted at shifty peaks and talked about how far the jetties might reach out onto the coastal shelf. We had no clue. Only a few silent fisherman in knee-high boots dotted the sand. We played it safe and walked south before wading into the cool, deeply green water. The longshore current rolled us north even faster than expected. We each caught an insider to the sand and did a lap. Haley posted up on the dune as spotter and photog. She was also the protector of “stuff” as it looked as though the downpour was imminent.

Our second swim was much more successful. We managed to find a sweet spot between currents. The swell was pumping and every few minutes the Atlantic turned one of those windy bumps to a drained out n’ gaping barrel. I found one. Leaning back to get the full view it was the vision I had been holding in my head for all those years.

We had been out an hour or so when the sky began to turn. Matt’s waves were leaving him in a recycling rip and the wind was goading the waves into bigger and hairy form. The sets were focused on his head and I tread toward him thinking I might be able to help in some way. Misery loves company. When I was finally close enough to see, I found a wide-eyed and tired brother. He was completely calm, just waiting for the Ocean to let him get a rest. The impending storm never arrived and we rode south to find another wave. We first peeped what was left of the Buxton Pier. Ravaged by time and Sea, the mess of pilings clutched at the shifting coast in the memory of what it had been. There was no telling what lie beneath the surface, at the edge of Buxton the coast looked more welcoming. Several surfers sat in the lineup and the overhead sets called us out again. 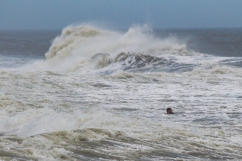 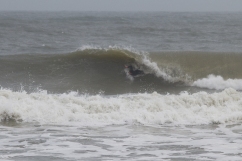 We shared another mind-bending session before calling it a day. I rode a few waves by a pack of local groms and wondered how many bodysurfers they had seen out here before. We cruised by the Avalon pier. In our teen years, my brother and I chased girls around the pier, bumped quarter machines in the arcade and played tackle football in the cool sand at night. There’s a certain repose found in a place so full of vibrant memory. Some sense of reticent wonder I’ll take with me home.

Ron “Canoe” Drummond was an author and surf pioneer whose massive 6’6 frame was eclipsed only by his passion for the Ocean. Drummond self-published The Art of Wave Riding at 24 years young. The year was 1931. The book was one of the first ever books written about riding waves and definitely the first written about bodysurfing. Drummond published a mere 200 copies of the 26-page artistic work. When you read Drummond’s work you may notice he fails to mention swimming fins, but that is because Owen Churchill wouldn’t submit his patent for another 9 years. By Drummond’s own admission, most wave riders of the time were athletically inclined and paid the price of time for their knowledge. He wanted to “increase a thousand fold the pleasure derived from surf bathing,” by providing hints at the best way to ride waves with your body.

If you can get your hands on a copy, one of the first observations that will blow you away is the fact that there are actual photographs from Drummond’s time of himself and others bodysurfing. The primitive photographic technology coupled with the difficulty modern-day photographers have with capturing bodysurfing is enough to merit a long look from all bodysurfing enthusiasts.

Drummond does his best to offer information to the casual surf bather and the seasoned surf swimmer alike. He describes two means of riding waves. The first is the position involving both hands out in front of your body with your head down in the water. The second and more advanced was to keep your hands at your side in what we call the “Prone” position. This matches all of the documentation we have of bodysurfers in Ron’s day riding prone to the beach. Drummond artfully guides the reader through bodysurfing small and large surf using the swimming terminology of the day and soulful delivery. He goes on to detail all the little tips he’s collected like stiffening one’s body, no hesitation, and taking a deep breath both for comfort and added buoyancy.

The Art of Wave Riding also catalogues the progressive tricks of Drummond’s day such as riding on your back, spinning and a front flip. It is striking to see the slow progression of our sport. The expert riders of 85 years ago were working on the same maneuvers as our comrades today. In perfect irony, Ronald B. Drummond’s mission was “that publishing this information now, all those interested in the sport can make faster strides while learning the fundamentals of wave riding and so have more time to help develop the intricate phases of this superb sport which in my opinion is still in the initial stages of development.”

This book is the one of the rarest books in the surfing genre and therefore very expensive. In recent years they have sold within the range of $1200-$4200. To find one you’ll have to scour auction sites or get lucky in other used book marketplaces. Ron passed away in 1996, but he left bodysurfers with the most exquisite link to their heritage within the 26 pages of Ocean joy, The Art of Wave Riding.

Yonder wave will bend and break,

Til winter dies and summer wakes,

The tourist hoard left with the sun

their pillagin’ day is done,

We seize the moment to sit in haze,

Yonder wave will bend and break

Til North Pacific turns to lake,

We drive the coast in sweet relief

As longer days retreat to brief,

Rejoice anew in each day’s sight

and lenses basque in morning light.