Record breaking Pacific Tropical season, solid Southern Hemisphere energy, early start for the Northern Hemisphere, warm water, moderate winds, clear skies: the 2014 summer surf season was/is phenomenal. An all-timer, a comparison for epic summers of the future, literally one for the record books. Wave-riders are battered and rashed… but smiling in remembrance of summer and excitement for winter.

Summer has the potential for weak storm tracks and minimal swell. Last summer was terrible. This summer was special. Purple blobs sent swell from various directions. Minimal marine layer allowed for plentiful sunny days.  Four thunderstorms graced San Diego in July and August. The water temperature moved into the 70’s in June and remained mostly trunkable well into October. The appearance of millions of velella velella- aka- ‘by-the-wind sailors’ on our beaches was seen as a positive omen by many water-people. Peter Hamann of San Diego Fishing Adventures says, “This summer was exceptional! The warm water allowed fish that normally stay deeper south to move north and provide us with amazing fishing.”

The 2014 Pacific Hurricane Season is one of the strongest since accurate measuring began in 1971. The Accumulated Cyclone Energy or ACE index, which measures overall storm energy, sees 2014 at 45% above the average as of press time. The season doesn’t officially end until Nov. 30th. SwellWatch forecaster, Nathan Cool remarks, “I’ve never seen so many hurricanes form in the NE Pacific in one year that took a northward trajectory, bringing not just swell to SoCal, but also torrential rain to inland areas.”  With 21 tropical storms, 15 hurricanes and 9 major hurricanes, 2014 compares favorably with the benchmark 1992 season.

Very warm water in the entire Eastern Pacific and low wind shear in the upper atmosphere fed a healthy storm track moving westward off the coast of Central America. The season started fast as Hurricane Amanda formed on May 24th. June and July combined for 5 tropical storms but nothing substantial. Then August exploded.

Hurricane Genevieve started in the East Pacific, then passed through all three North Pacific basins. She strengthened into a Category 4 hurricane south of Hawaii and was reclassified as Super Typhoon Genevieve after passing over the International Dateline. She then moved north and met her demise over cool water.  Hurricane Iselle followed, moving west and reaching Category 4 status. On Aug. 7th, she (now a tropical storm) was the strongest tropical cyclone to ever make landfall on the Big Island of Hawaii.  Next, Hurricane Julio strengthened into a Category 3 as he moved to the NE of Hawaii, delivering fun surf to places unaccustomed to such tropical swell. Hurricanes Karina and Lowell reached category 1 status as they moved into the California swell window. Lowell delivered a fun sized pulse of tropical swell that was a hint of things to come.

Beginning on Aug. 10th, the National Hurricane Center monitored a tropical wave as it moved off the coast of Africa and across the Atlantic Ocean. Nine days later, a low pressure system crossed over Panama into the Pacific. Above average water temperatures and low wind shear allowed for rapid intensification and on Aug. 22nd, the NHC classified her Tropical Storm Thirteen-E.  Just six hours later, she became Marie. Moving into the SoCal swell window on a N-WNW track, she strengthened into a Category 5 hurricane with 160mph winds on Aug. 24th. 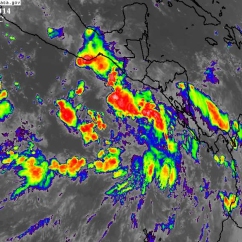 Lowell and Karina to the left, Marie intensifying to the right. Image: NASA

On the evening of Tuesday the 26th, abnormally long, 18” tropical forerunners began to show at south facing beaches that could handle the SSE direction. First light, Big Wednesday, the 27th: 25ft. Wedge freight trains off the Jetty, perfect 12ft. Malibu reeling past the Pier, 15ft. Newport Point as good as California gets. The wind stayed down for the rest of the day and everyone near the coast was treated to a decadal spectacle of Ocean power and beauty. 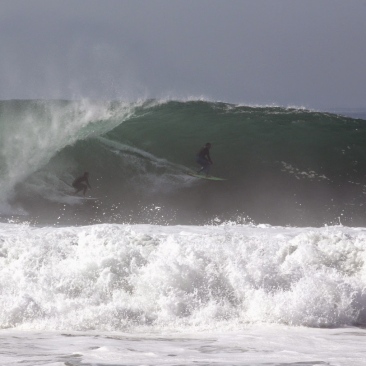 Two weeks later, Hurricane Odile made landfall on the Baja Peninsula as the strongest storm ever to do so, with 125mph winds on Sep.15th. The widespread damage to Cabo San Lucas is a terrible reminder that these storms aren’t just fun swell producers but also extremely powerful and dangerous.  Hurricane Simon strengthened and took a favorable swell producing path during early October.  Tuesday the 7th saw another round of solid, clean hurricane swell lighting up Newport Point and Wedge.

The Southern Hemisphere filled in the gaps nicely between hurricanes with consistent SW swell. There were no real standout southern hemi swells but it wasn’t dormant either. With a bit of patience, fun sets were always on their way… eventually.  Locally fun swell for southern exposures meant the surf rarely dropped below waist-high for weeks at a time. A glorious, fire-free Santa Ana wind event with pulsing SW swell lit up the California coast in early October. Even the North Pacific pitched in with a series of early season swells derived from typhoon remnants off the coast of Japan.

Here are reviews from two Newport locals that have been in tune with summer surf for more than 50 years combined:

-Wedge Historian Mel Thoman says, “I’ve been recording “Wedge Calendars” since 1978 and that year remains #1 for size/shape/number of swells/conditions etc. 2014 made my Top 10 by the end of August and then vaulted into the Top 3 by October. It’s 2 or 3 for sure. The whole Crew charged hard with great vibes in and out of the water.”

-Long-time Wedge observer and pundit, Ron Romanosky, gave this review of 2014: ”This last summer’s swells rank among the top 5 in the last 3 or 4 decades.  Fantastic weather kept the waves rideable from first to last light far more than usual.  And let’s not forget the warm water!  By their performance in big waves, several of the young guns of Wedge bodysurfing now reside at the top of the list of Wedge’s top dogs. They/we know who they are.”

Purple Blob Review: Summer 2014
Consistency– 4/5
-No major Southern Hemis but plenty of swell around even between the epic tropical pulses.
Conditions– 5/5
-Sunny skies, warm water, minimal on-shore flow…yes please.
Intensity– 5/5
-One of the largest, most intense summer swells in California surf history and a series of other very solid swells. Not much else to ask for out of a summer season.
Overall- 5/5
-An all-time classic.

To El Niño or not El Niño?  Eastern Pacific sea surface temperatures have fluctuated over the past few months and with them the predictions for El Niño. From very strong to moderate back to strong. My prediction: This is the beginning of a 3 year El Niño cycle. Starting moderate this year with low pressure dominating the Gulf of Alaska; bringing abundant NW winter swells to California and Hawaii. Along with reservoir-filling precipitation and feet of powder to all slopes. Then another strong tropical summer in 2015 and an epically strong El Niño winter next year. Pumping swell for years to come!
-KS