Bill Lucking was a health fanatic. When all the other lawyers from his firm would go to lunch and drink martinis he would grab his green Churchills and bodysurf the waves of South Jetty. Bill may have found his way to the Ocean to stay healthy, but over time, his enthusiasm would draw all sorts of souls into the Pacific. In those early years, Bill and friends built the foundations of what would one day become South Jetty Swells. In the process he also instilled a love of the Ocean in his very own children whom had their very own children and this is where we find the Fords.

I drove through the night to rendezvous with Bill’s grandsons. Chris, Dave and Spencer stood in the mid-December darkness sipping coffee and squinting for a glimpse of a wave. They jawed at each other and rolled familiar conversation all the while waiting for some sign that the Ocean would provide. Dave was the first to break. He could wait no more, the others followed suit. It had always been this way. When solid waves are on the horizon, Dave wakes at 2:30a.m. restless and excited. Dave wants to be out the back; he swims to the outside and waits for the bombs. 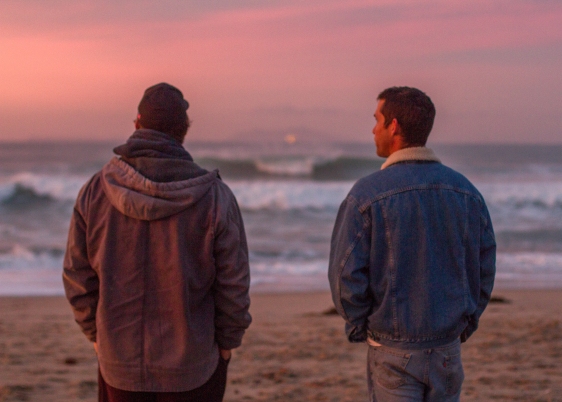 His twin, Chris, is no stranger to adrenaline. He’s a dedicated firefighter and when he gets the opportunity to swim in serious swell he doesn’t hesitate to put himself in the belly of whatever comes his way. Spencer, affectionately referred to as the “Wookie,” follows the twins. The man is 6’5 with a wingspan to match. Like so many bodysurfing standouts, all the boys stretched their love of the water into playing water polo. A subtle toughness lies under their welcoming vibes and strong handshakes. I imagine that when the big set swings into view they’ll be chasing, not being chased. 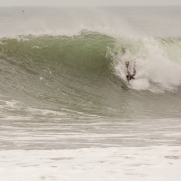 Chris feeling it out 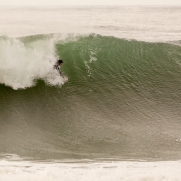 Our session was a confirmation of my suspicions. They took me to their second home, South Jetty. The swell was growing as we swam. We all started together, but the peaks were flashing up and down the beach. Chris rode a wave from the outside almost to the sand. Dave hucked himself into bumps that turned inside out. Spencer was ever seeking, taking long, smooth strokes from jetty to jetty. We stayed out for hours. They talked about proper South Jetty waves and eventually I got to see the magic, if only for a little while. Soaked and stoked we finally made our way to their traditional post-surf grub.

We sat at a booth at Taqueria Tepatitlan and the Fords talked about work and family. They chatted with the owners like old friends. I felt a familiar feeling that would last the whole trip. Ojai was my small hometown dropped just minutes away from unbelievable waves. That evening we all ate at the family ranch. 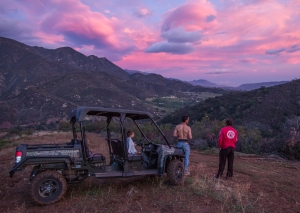 The ranch rests in the stunning hills of Ojai. Chris, Dave and Chris’ son “Little Ernie” drove me up the hills on the back of a Gator while the sun painted the sky. Little Ernie was shivering, so his dad gave him the shirt off his back. We admired the fading light while the guys took turns throwing rocks at rocks. Brothers always find ways to make games out of nothing.

As the whole family arrived I was shown the library that could have been called a trophy room. If they had them hung, their bodysurfing accolades could have filled the room. The Ford matriarch, Carly, bodysurfed in the second World Bodysurfing Championships. She is Bill Lucking’s proud charger. She refused to let the contest be a boys club. Carly would bodysurf with her mom and dad at South Jetty and proudly dragged her young salts in after her. An absolute stoker, Carly has squared off with the waves of Puerto Escondido. She talks about it fondly as other parents would describe a long weekend in wine country. Ernie and Carly don’t have to say it, but their pride in their children is evident. Between the five of them, the Fords have secured seven Grand Master Championships and countless age-group victories. 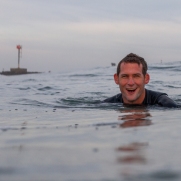 When we all met in the morning at an unnamed Ventura break the waves were well overhead. The whole family looked over the sea with confidence. The Fords swam out to the horror of the swarming beach-side gawkers. We played in the Ocean like children for hours. When my shoulders were slumped with fatigue I took my final goodbyes. For the Fords, it’s South Jetty or bust, but count yourself lucky if you find yourself sharing waves with the first family of bodysurfing.

Special thanks to Mike Rubalcava and Eric Eiser for sharing their beach photographs. 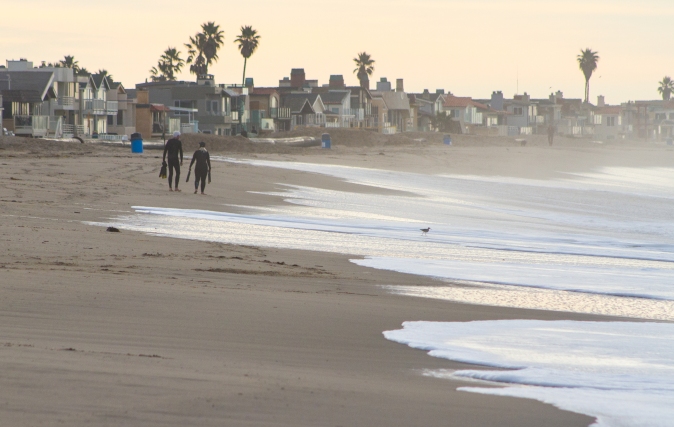 All photos are original Swell Lines content unless otherwise indicated.