Bud Browne created the first surf films, documenting surfing and its culture from the birth of modern Big Wave Surfing through the short board evolution. A teacher until the age of forty, he left teaching to invent the career of a surf filmmaker. He produced his first film, Hawaiian Surfing Movies, in 1953, and then went on to produce 13 more. Now recognized as the father of the surf film and the creator of the genre, the pioneer spirit in which he tackled his craft has led and inspired an industry that has grown into the mainstream psyche. His contribution to the art of surf filmmaking is immeasurable, and he is revered in the industry as a Surfing National Treasure.

Yes, he is the godfather of the surf film, capturing the golden period of modern Big Wave Surfing in the early 1950’s, through the short board revolution of the 1960’s through mid-1970’s. But perhaps nothing defined Bud Browne more as a man of water than that of a bodysurfer.

Like every bodysurfer, his connection to the water began with swimming. In fact, it was his exceptional power as a swimmer that coined him the moniker, the Barracuda. He was captain of the USC swim team and a stellar athlete, but it was while swimming competitively for the L.A. Athletic Club that a chance encounter with the legendary Duke Kahanamoku inspired a visit to Hawaii. Duke was visiting the LAAC in 1930’s when he observed Bud swimming the freestyle stroke in the pool. He approached Bud, and after introducing himself, offered some swimming pointers on the freestyle. It was this friendly exchange that led to Bud’s visit to Hawaii in 1938. Traveling there on the Matsonian Mariposa’s maiden voyage, he met up with Duke Kahanomuku once again, filming him in Waikiki surf, and became a member of Hawaii’s Waikiki Surf Club.

It was in the 1930’s as a lifeguard that Bud first learned how to surf on the lifeguard rescue paddleboards. Later, he took a surfboard to Hawaii in the 1950’s, leaving it there so that he would have a board to surf whenever he returned to the islands. The board was used by various friends and eventually lost, but by then, Bud had already shifted gears, spending less time on a board and more time behind a camera.

What began as a hobby soon became a serious pursuit. A teacher for the Los Angeles County School District, Bud made the decision to leave the secure job of teaching to invent the career of a surf filmmaker. Attending USC to study film editing, he began to study the craft of filmmaking in earnest, eventually filming fourteen full-featured surf films. 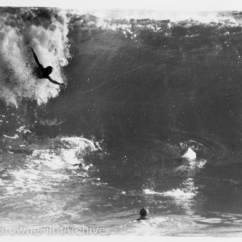 Although he left surfing, he never left bodysurfing. Devoted to the freest form of wave riding, he filmed bodysurfing prolifically in California and Hawaii from the 1960’s through 1980’s. Every single one of his films that he produced included bodysurfing. Bodysurfing and swimming himself until he was well into his eighties, he never left the water until the loss of his eyesight prevented him from doing it any longer. Still, toward the end, he dreamed of it.

At the final stretch of life, when time was pressing, we began to talk about the ‘favorite beach.’ Often noncommittal in his opinions because he never wished to offend, he was hesitant to swear allegiance to one place over another. Still, we mulled over the different spots, and the one constant was that it was always somewhere in Hawaii.

I think at this point in ones life, the summation of your life is weighed by where and what you gave the best of your self to. And it was perhaps for this reason that his choices narrowed between Makaha and Pipeline. Interestingly, the first, Makaha, was where he began his career as a filmmaker, and the second, Pipeline, was where he filmed his final full-featured film.

Then, shortly before he passed, I asked him for the umpteenth time, “What’s your favorite beach Bud?”

And this time without pause he said, “Pipeline.”

“What’s your favorite spot to film?” I had become relentless.

Again, without missing a beat he said, “Pipeline.”

I needed to get this one right. “What’s the prettiest wave?”

He paused here before saying, “Pipeline.”

Then, I don’t know why, but maybe because I wanted no stone unturned, “What’s your favorite place to bodysurf?”

“Pipeline.” And that’s how it was decided.

He was so right of course. As usual. Because Pipeline is where he gave the best of himself. It’s exactly where he should be bodysurfing for all eternity. Lucky! Long live the Barracuda.

Anna Trent Moore is a teacher, writer, surfer, and curator of the Bud Browne Film Archives, the most significant film collection of surf history in the world. Born and raised in Makaha, Hawaii, she is the daughter of legendary Big Wave surfer Buzzy Trent. Anna has written numerous articles on surf history and has published three books, Increments of Fear: The Buzzy Trent Story, One Ocean, and Laughing at Water. Anna divides her time between the California coast and Hawaii, where she writes about surfing and it’s people.