Jonathan Steinberg is a dedicated mat rider on the Westside of Santa Cruz. With many years of fin wearing experience, Jonathan’s collection and knowledge are unlike any others. He recently had an art show at The Great Highway Gallery in Ocean Beach, SF with Mark Cunningham. The show, titled “Shorepound Lost & Found” featured treasures found by Cunningham on the North Shore of Oahu and swim fin artwork created by Steinberg. 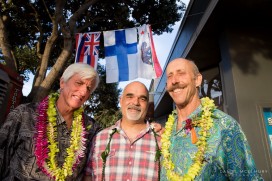 Fins? I really like fins. Always have. My first fins were an adjustable pair I had when I was a kid. Sorta mini Duckfeet pattern with a nice graphic of a sailfish on them. We used to bodysurf, mat surf and ride foamies (Styrofoam paipos) at Zuma when I was a kid in the 60s and 70s. I kept the sailfish fins long enough to give them to my son. They disappeared in Kauai on a visit 20 years ago. Next, I had a pair of green soft Churchills. I got them at the Goleta Flea Market in maybe 1977 (or 76 or 78). I still have then. Really soft and comfy but not much thrust.

Next, I had a nice mismatched pair of Churchills. Black and Yellow Boogie Fin and a classic Makapuu. Those where my warmer water fins. Good all round and a solid choice. Not bad on the feet without socks. When it got cold I would wear trimmed down Duckfeet (Super XL) over surf booties: good thrust, not too heavy but not a great fit. Then I started wearing Redleys with booties. Good thrust, good fit and comfy. A little heavy but that was the jam for several years.

Then I started wearing Dafins in warmer water maybe 5 years ago. Again good all around fins. I especially enjoy their lightness. Instead of the Redleys I started wearing Viper MS fins over 3 mil surf booties. Really liked the feel, the thrust, weight and fit over boots. Viper and Dafin are core surf companies, I liked supporting them. 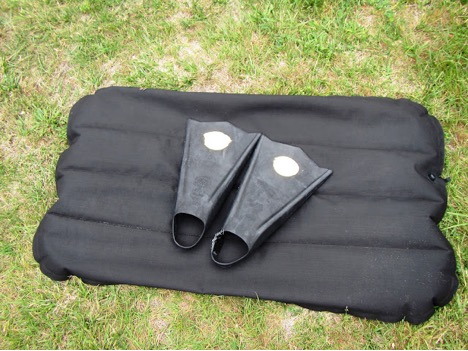 Recently I have started wearing the new formula Duckfeet (green and blue) and have become a convert. The fit (with thin fin socks), the weight, the thrust all fantastic. I surf long righthand points, with the ducks I can cover a lot over ground on the swim back. 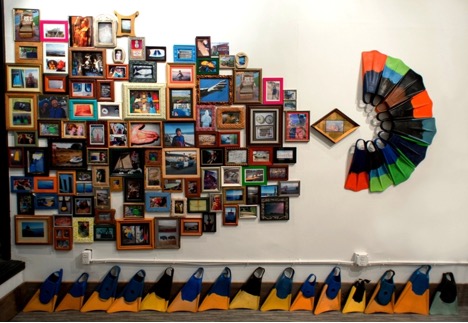 I also use fins in my art. My friends kick over found singles, orphan, outgrown and broken fins. I now have hundreds. The neighborhood groms know they can come by if they lose a fin or grow out of their pair. Someone gave me a nice pair of red Redleys. They are lighter with a better fit without a fin sock so I am looking forward to trying those.

Fins I tried and didn’t like? UDTs, Classic Vipers, the new yellow and orange vipers, most oddball boogie fins. I have super long narrow feet. Not everything works for me.

Check out more from Jonathan at: